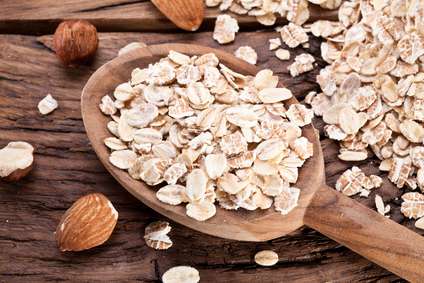 I know I left you in a lurch a bit the other day when I mentioned making this homemade gluten free granola, but left no link or recipe, so I’ll leave you with my due diligence here.  It would be dishonest of me to say that I made this up as I got the bones of this recipe from a dear friend years ago.  But what happens every time I make it is that I measure less and less and we leave it longer and longer for lower and lower temperatures in the oven and it has just taken on a little life of its own.

And we started out the baking at 275, which is typical for us.  At this level I stir every 30 minutes or so.  But then we had an errand to run so I turned it down to 225 where it sat for the next 90 minutes (because though the house smelled awesome when we returned, I forgot about it) when I stirred it again and turned it back up to 275 to crisp it up and finish it off.  Now I have a beautiful gallon jar full of homemade granola.

We’ll add chopped dried fruit or raisins to it and it’ll go nicely with the yogurt I made from the raw milk yesterday.

Do you have thyroid issues?

You don't have to be sentenced to a lifetime of medication. Your body is designed to heal itself, it just needs the right support.